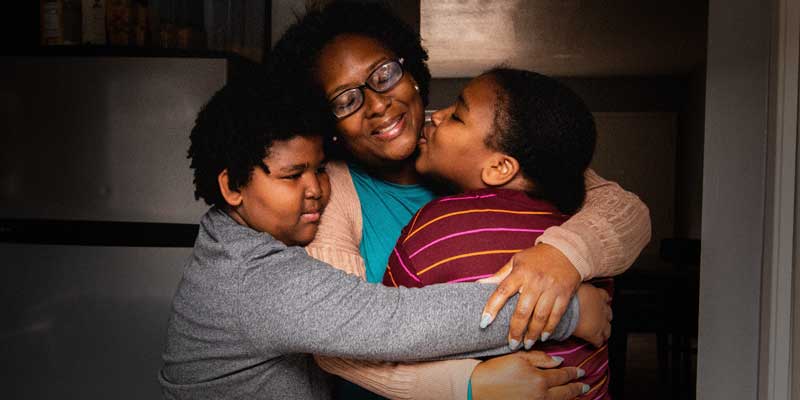 Tamara and her family had moved to Phoenix in September 2020 with less than $300 to her name. At first, they lived in a hotel, but the money quickly dwindled. Everything went downhill fast. The bills piled up, and shortly, the hotel was no longer an option.

During this time, she drove by The Salvation Army several times, but her pride prevented her from asking for help.

So, Tamara and her kids found themselves staying in a storage unit, and before long, they couldn’t even afford that, so they began living in their car.

Tamara was so worried about the safety of her children in the car that she barely found any time to sleep herself. Sleep meant she wasn’t looking out for her kids. She had to make do with as little as possible.

Tamara was ashamed for having put her children in this situation. But still, she drove by The Salvation Army, refusing to reach out.

One day, all that changed.

Tamara said, “I was sitting in the car because I was so ready to give up, and I said, ‘If I give up, what are my kids gonna do? Where they gonna go?’ When I drove past The Salvation Army, something said, ‘Go there.’ And my life changed — within 60 days.”

The Salvation Army initially provided items like bus passes, food, toiletries, and blankets, and they put Tamara and her kids on the list for housing.

When her name came up for the housing, she couldn’t believe it. Her children thanked her with all their hearts, and in the safety of their new housing, Tamara did something she hadn’t done for weeks.

To Tamara, the programs at The Salvation Army are nothing short of mind-blowing, “You see the programs work, not just for you, but for other families.”

Tamara works as a delivery driver for different companies, a job that allows her the flexibility to be there for her kids as much as she needs to. The family car is no longer a place to sleep (or not sleep). It now helps Tamara provide for her family. Tamara has since moved out of The Salvation Army’s housing and has been able to afford a place of her own.

Tamara believes God put her where he wanted her to be, and she hopes her story will help someone reach out when they need help.

“The Salvation Army provides hope through the programs they provide. I just cannot stress that enough. If someone is in poverty who’s struggling, I tell them to have faith. To trust. And The Salvation Army will allow them to come out of the situation.”