ALEXANDRIA, Va. (Nov. 20, 2021) For more than 40 years, Walmart and The Salvation Army have partnered for good. The partnership has grown substantially in recent years and resulted in about $60 million of support for families in need around the holidays last year. Walmart is going above and beyond again in 2021, with round up at Walmart.com, an early start for storefront red kettles on November 20, and the Walmart Angel Tree, available in Walmart stores, Sam’s Clubs, and online at WalmartAngelTree.com.

“We are deeply grateful for Walmart’s contributions, which have resulted in critical support for millions of our nation’s most vulnerable individuals and families,” said Commissioner Kenneth G. Hodder, National Commander of The Salvation Army. “In addition to decades of an incredible partnership, Walmart has taken a pivotal role in the fight against pandemic poverty around the holidays and beyond.”

In previous years, Walmart hosted The Salvation Army’s storefront red kettles starting on Black Friday. To meet the increased needs of communities impacted by the pandemic, the company has welcomed The Salvation Army to start early for the second consecutive year at Walmart stores and Sam’s Clubs.

“Just a day of red kettles at Walmart stores around the country could mean millions of dollars to help families who are struggling to keep a roof over their heads,” said Commissioner Hodder. 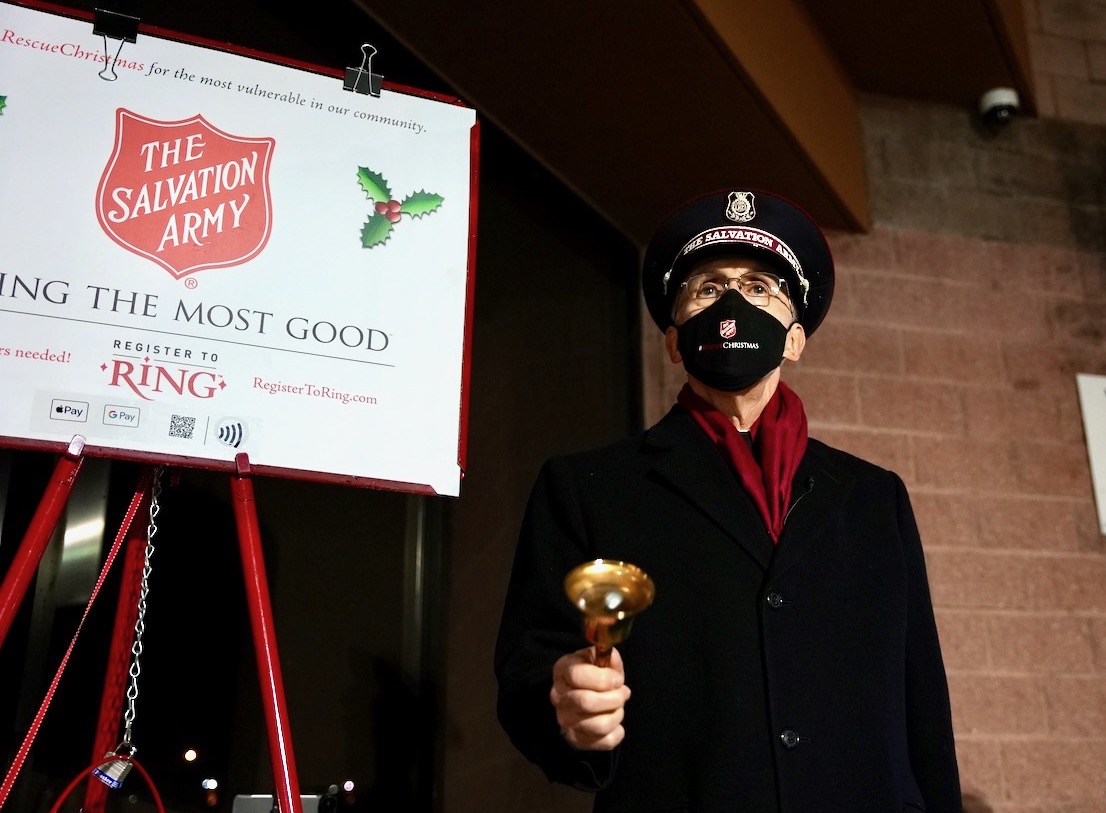 According to the U.S. Census Bureau, 4.67 million Americans say they are very likely to face eviction over the next two months because of nonpayment. With a slow distribution of federal funding, families could be evicted before relief arrives.

The Salvation Army has already distributed more than $200 million in direct financial assistance to help people stay in their homes in 2021, after receiving more requests for financial assistance in the first six months of the year than in all of 2020. The Salvation Army estimates it will need to raise an additional $175 million to help Americans facing evictions and foreclosures to keep their homes. For context, that’s almost 50% more than the organization raised through red kettles in 2020.

In addition to an early start for the Red Kettle Campaign, Walmart and The Salvation Army have rolled out a variety of partnership efforts to meet the need this year.

At Walmart.com and the Walmart app, customers have the option to round up their purchases to the nearest dollar and donate the difference to The Salvation Army from November 4 to December 28. The giving option raised more than $5.4 million in its inaugural year of 2020.

The Salvation Army Angel Trees will appear in participating Walmart stores and Sam’s Clubs, giving local shoppers the opportunity to select children’s wish lists from the tree and to purchase or drop off gifts onsite.

And those who prefer to do their shopping online can visit WalmartAngelTree.com to find their closest Angel Tree Registry, either in-store or online. Through the website, customers can shop for gifts and have them delivered directly to a local Salvation Army.

“Our customers and associates are passionate about supporting causes like their local Salvation Army,” said Julie Gehrki, vice president of philanthropy at Walmart. “We’re thrilled to use our stores and online capabilities to support Salvation Army as they provide critical resources in communities, particularly as they help make the holidays happy for children and families across country.”

The Salvation Army provides new Christmas gifts for more than one million vulnerable children through the Angel Tree each year. Nationally, 82 cents of every dollar donated to The Salvation Army goes directly toward funding local initiatives. In addition to the Red Kettle and Angel Tree campaigns, Walmart has long supported the Salvation Army’s efforts to respond to communities hard hit by disasters. 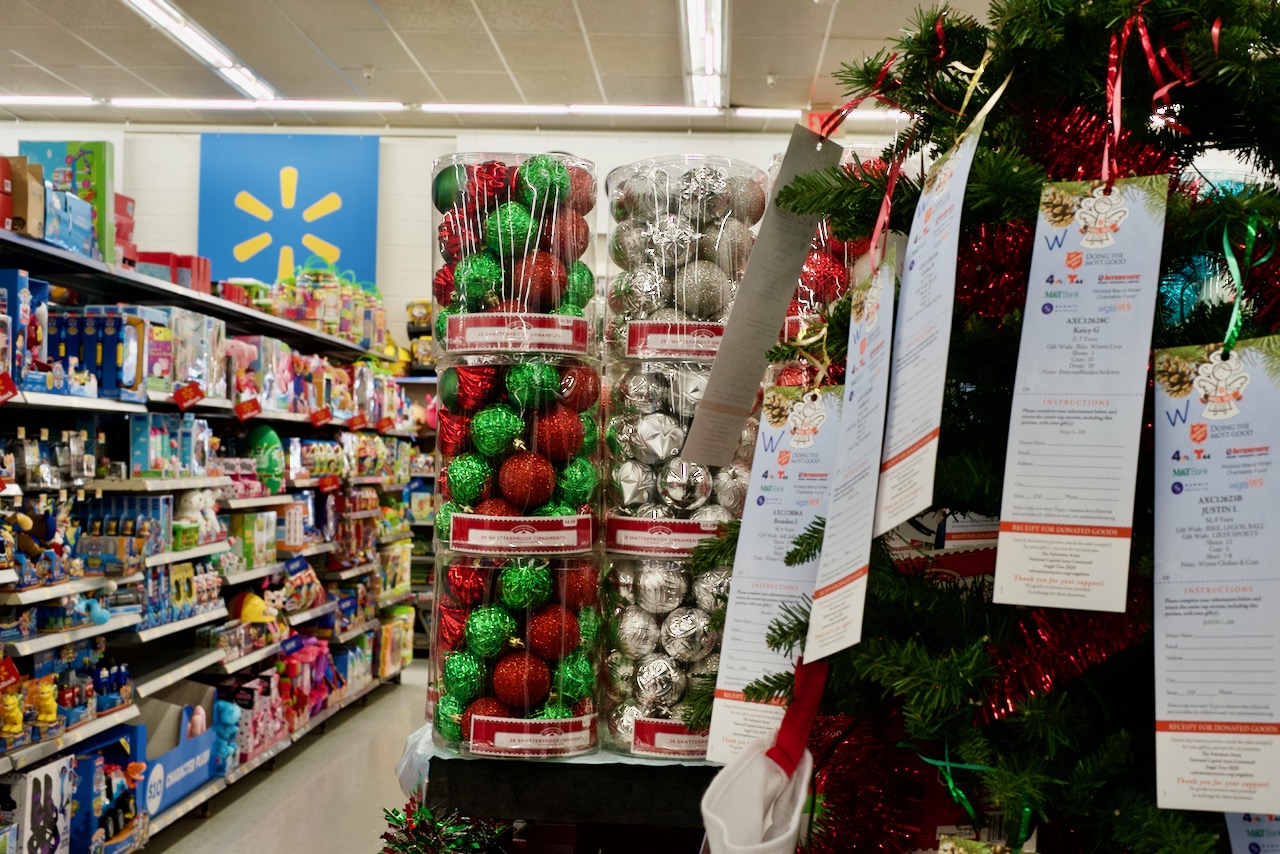 A Salvation Army Angel Tree inside a Walmart store

Visit HopeMarchesOn.org to donate or learn more about how you can help The Salvation Army bring Christmas joy to families this year. Every donation helps make sure that hope marches on for hardworking individuals and families. All gifts stay within the community in which they are given. If you need services or know of someone in need, please visit SalvationArmyUSA.org to find a location near you.

The Salvation Army has adopted nationally mandated safety protocols for physical kettles to help ensure the safety of bell ringers, donors, and partners.

The Salvation Army annually helps more than 30 million Americans overcome poverty, addiction, and economic hardships through a range of social services. By providing food for the hungry, emergency relief for disaster survivors, rehabilitation for those suffering from drug and alcohol abuse, and clothing and shelter for people in need, The Salvation Army is doing the most good at over 7,000 centers of operation around the country. In 2021, The Salvation Army was ranked #2 on the list of “America’s Favorite Charities” by The Chronicle of Philanthropy. For more information, visit SalvationArmyUSA.org. Follow us on Twitter @SalvationArmyUS and #DoingTheMostGood.