CINCINNATI (September 16, 2021) —The Kroger Family of Companies, America’s largest grocery retailer, has received The Salvation Army’s highest honor and award, on behalf of nearly half a million associates, for its philanthropic efforts to Feed the Human Spirit™. The Evangeline Booth Award, presented at The Salvation Army’s National Advisory Board meeting in Cincinnati, is bestowed to individuals and organizations dedicated to doing the most good in communities across the country.

The Kroger Family of Companies is a long-standing partner of The Salvation Army, supporting the Red Kettle Campaign that invites bell ringers to collect donations outside thousands of stores nationwide. Since 2005, the company’s generous associates and customers have donated more than $200 million to The Salvation Army, providing services for millions of people annually from coast to coast. 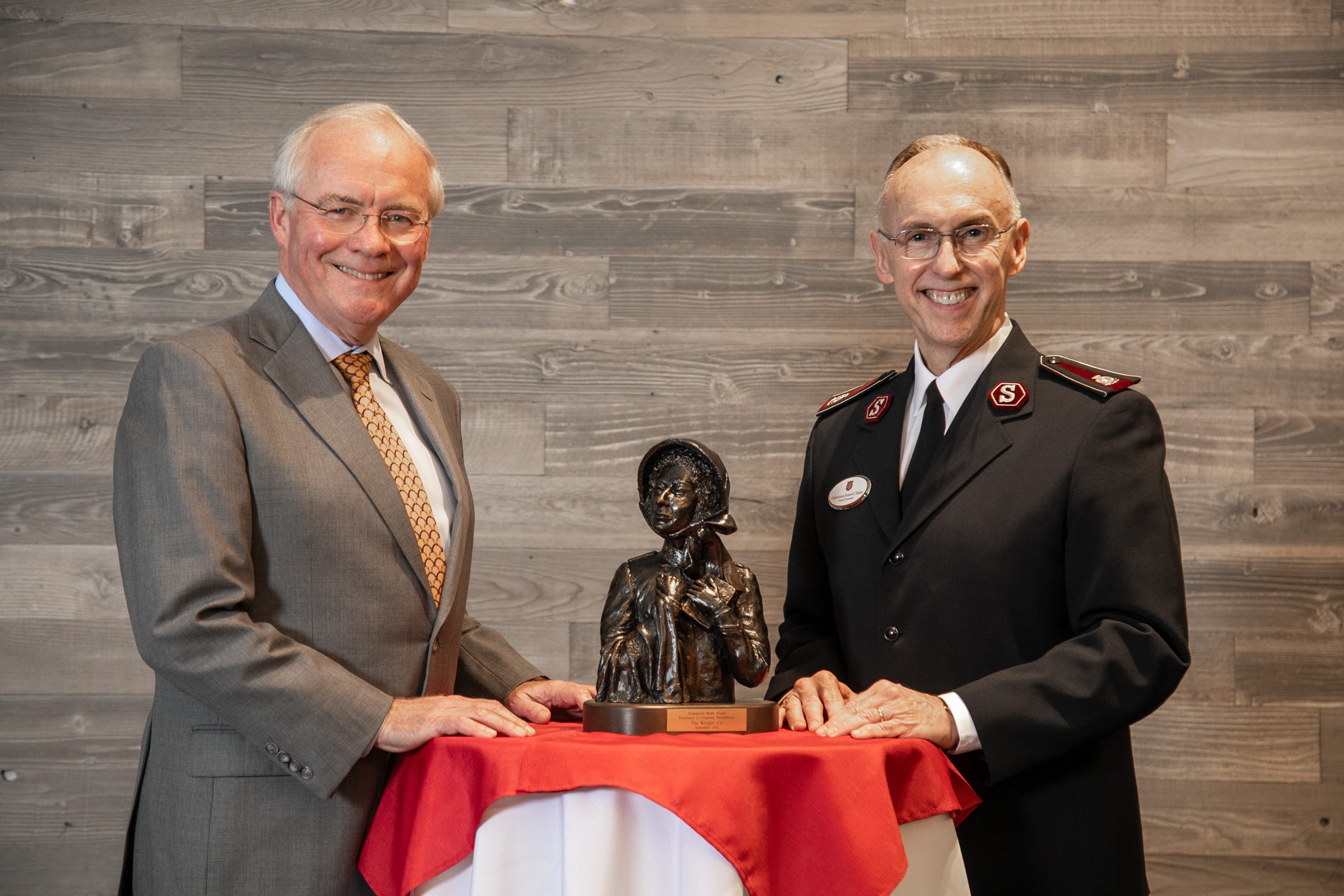 This generous support helps advance Kroger’s Zero Hunger | Zero Waste social and environmental impact plan, the company’s commitment to help create communities free of hunger and waste. Since 2017, the company has directed a total of 1.8 billion meals to local communities in food and funds combined.

“As America’s grocer, Kroger is committed to helping end hunger in our communities by improving access to nutritious meals through our Zero Hunger | Zero Waste plan and with nonprofit partners like The Salvation Army,” said Gary Millerchip, Kroger’s CFO and Salvation Army Greater Cincinnati Area Board Member. “We thank The Salvation Army for this recognition and our associates and customers for continuing to demonstrate the warm spirit of giving at the holidays through the Red Kettle Campaign.”

In 2012, The Kroger Family of Companies received the Others Award, which honors an individual or organization exemplifying an extraordinary spirit of service to "others," not only through the support of The Salvation Army but for the broader community as well.

About The Kroger Co.

At The Kroger Co. (NYSE: KR), we are Fresh for Everyone™ and dedicated to our Purpose: To Feed the Human Spirit®. We are, across our family of companies, nearly half a million associates who serve over 11 million customers daily through a seamless shopping experience under a variety of banner names. We are committed to creating #ZeroHungerZeroWaste communities by 2025. To learn more about us, visit our newsroom and investor relations site.

The Salvation Army annually helps more than 30 million Americans overcome poverty, addiction, and economic hardships through a range of social services. By providing food for the hungry, emergency relief for disaster survivors, rehabilitation for those suffering from drug and alcohol abuse, and clothing and shelter for people in need, The Salvation Army is doing the most good at 7,600 centers of operation around the country. During times of disaster, 100 percent of designated donations to The Salvation Army are used for immediate response and long-term efforts. In the first-ever listing of “America’s Favorite Charities” by The Chronicle of Philanthropy, The Salvation Army ranked as the country’s largest privately funded, direct-service nonprofit. For more information, visit SalvationArmyUSA.org. Follow us on Twitter @SalvationArmyUS and #DoingTheMostGood.